We’ve been exploring the possibilities of small, connected printers for a while now – not only how to build them, via our Printer platform and dabbling with BERG’s Little Printer, but more importantly how best to employ them.

Is there a balance between utility and whimsy where this new medium shines? We think so, and we think we have a good example … (puts on sunglasses) … to share with you. 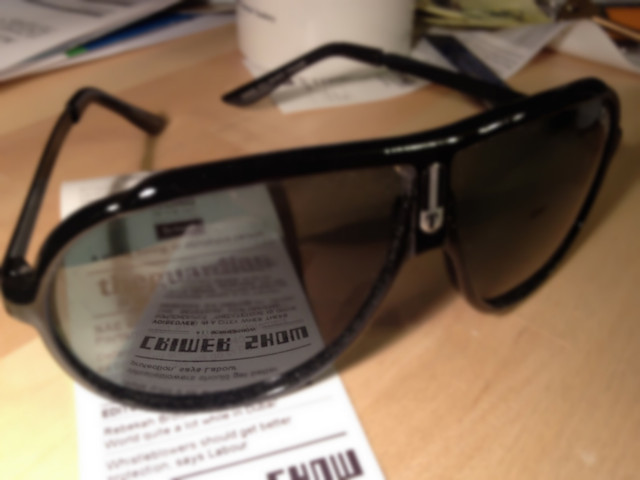 Just as the then-new medium of broadcast radio gave birth to unique forms of storytelling, like live episodic dramas, there’s a new form of story developing on one of the new mediums of this generation – Twitter. The blend of anonymity, parody and the constraints of Twitter (like limited tweet length) are becoming sufficiently familar that the internet is now starting to create and experiment on top of that platform, knowing, exploring and exploiting its particular strengths and weaknesses.

Accounts like horse_ebooks1 are a fairly extreme example of this experimentation, as are the likes of Markov Chocolate2 and the anthropomorphised Tower Bridge (Itself)3, both by friend of Exciting Tom Armitage.

But lets focus on the part of the spectrum that more closely resembles “normal” fiction – in other words, where there’s definitely an author with intent. Here’s Andrew Fitzgerald giving a great overview:

He puts it better than I did:

So once you take flexible identity, anonymity, engagement with the real world, and you move beyond simple homage or parody and you put these tools to work in telling a story, that’s when things get really interesting.

One of our favourite examples of this new kind of fiction is Crimer Show, by Astonishing Sod. Ostensibly an absurdist take on the inexhaustible supply of police procedural dramas, but using the same alternate-universe spelling and grammar of Freints, Crimer Show gradually builds its own world using clichés from CSI – (puts on sunglasses) – and the like:

It’s the familiar gritty policy world wherein the Detetcive (sic) has a drinking problem and the Mayoore (sic) is a drug addict, but the substances abused aren’t vodka and crack, but “melk” and “jeleybeens” (sic, sic) respectively.

While one of the unique ways Twitter fiction works is by spreading its narrative throughout the rest of your timeline, in real-time as it were, it can be hard to introduce new people to these stories once they are well under way. Crimer Show is, at the time of writing, almost 1,200 tweets in, which represents a fairly arduous scrolling mission for someone who wishes to start at the start.

And it’s in this problem that our little printers might provide a solution that strikes the balance of novel, useful and whimsical to which these devices seem most suited.

And so we present: The Crimer Show Printer Publication 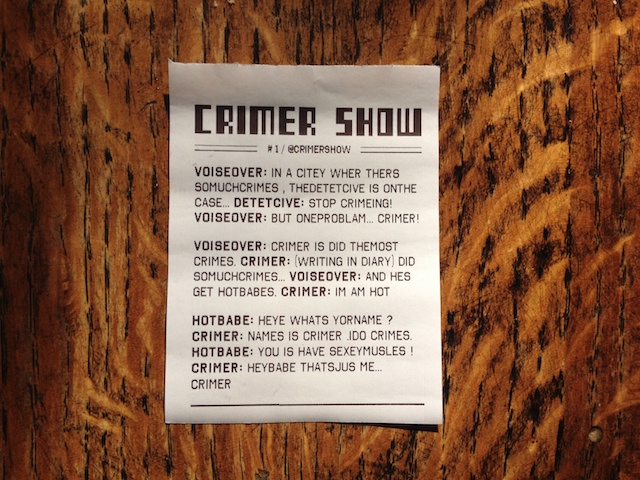 You can subscribe using BERGCloud remote here. Every weekday you will be treated to the next three parts of Crimer Show, starting from the very beginning.

We think it’s the perfect way to enjoy catching up with the world of Crimer, alongside whatever other information you happen to be printing. You can see it sitting very comfortably in a normal daily printout: 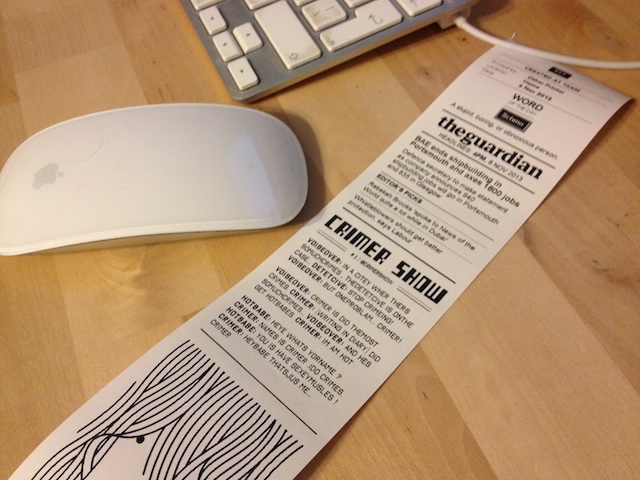 But what do you think? Maybe you’re still unconvinced by little printers? You could be right. Let us know in the comments below, on twitter or by emailing hello@exciting.io.