Probably the most important and useful aspect of going to conferences and meetups is spending time with the people there. It’s often useful finding out what new things communities are working on, what they are interested in, and where they are going for dinner (or a dram).

The obvious way to feel the collective pulse of an event is via Twitter, and hashtags aren’t too bad for listening in on a conference hive-mind. That said, we have a suspicion that there could be a better option.

This was originally posted on the GFR blog

We’ve spoken about the idea before, and even run a quick prototype to gather feedback and test the concept. However, those are just explorations in software; they don’t qualify in my eyes as a “product”.

After a few days of flipping between developer and user roles, I think we finally have something ready for consumption.

The idea is called HeyList!, and this is what it looks like now: 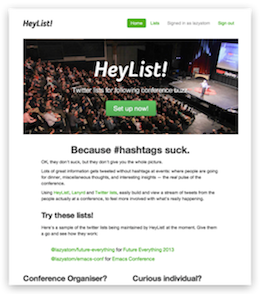 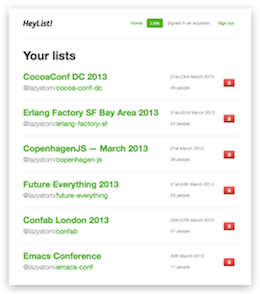 The premise is quite simple. When a bunch of people are together at an event like a conference, social services like Twitter can really enhance the experience. You find out what’s happening in other rooms, what people are doing and thinking at the event, and lots more.

It’s fairly typical for people at such an event to use a hashtag, like #railsconf or #rubymanor, to mark their tweet as relevant to that event.

What we’ve found, however, is following the hashtag tends to only reveal the superficial or conterversial aspects of the event; the tweetable quotes, the quips, and the musings of a fairly small set of “Twitterati”.

You miss out on lots of information that’s peripheral to the content of the conference, but potentially far more valuable. A great example of this is where people are going to socialise afterwards.

Twitter has another mechanism for gathering together a curated set of tweets: lists.

Twitter lists create an alternative timeline of tweets from all of the people added to that list. You can create your own lists, or subscribe to lists created by other people. You can also add people to your lists that you don’t necessarily follow. Most twitter clients support lists now, including the mobile web-based client.

Lanyrd is a social conference directory that people can use to find events and mark themselves as attending those events. Many people sign in to Lanyrd using their twitter accounts, and anyone can browse the list of attendees for any event.

And so, that’s our solution to the hashtag problem: create twitter lists for events using Lanyrd’s attendee directory. We imagine that conferences could use HeyList to create lists on their own account (e.g @rubymanor/ruby-manor-4), and have other people subscribe to those lists, but anyone can use HeyList! to build a list against their own twitter account if they like.

Here are some example lists that have already been made:

Anyone can sign up to HeyList!, and we’d be really intersted in your feedback about it. Try it now and follow the @heylist account for updates and news.