The response to our open source printer project has been amazing, but some people rightly have questions, so I’ll try to answer them here.

If you’ve got a question about Printer, or want to discuss your ideas for printer, why not check the FAQ on the wiki, ask on the mailing list, or follow the printer project on Twitter? 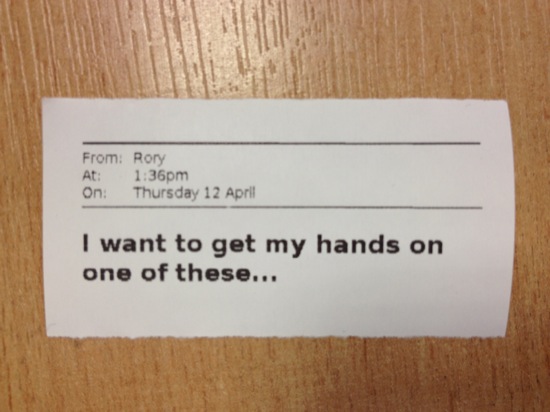 A: That’s great Rory, and we’d really love for as many people as possible to start exploring with us. For me, one of the main aims of this project is to get other people to build some great content services that we can all take advantage of.

The fastest way of getting your hands on one right now is building one yourself. There are some hopefully comprehensive instructions on the github wiki, which should be easy for anyone to follow. 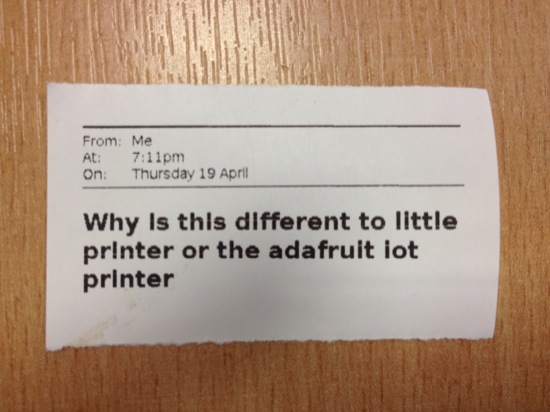 A: This is a great question, which for various reasons I’ve avoided answering, but may as well address it now.

Our printer platform system, on the other hand, separates the content from the printer entirely, and makes it very simple to send rich content for printing from a variety of services.

However, it’s fairly simple to configure the Adafruit IoT printer to work with the Printer. You’ll need to add an SD card, and modify the sketch slightly since the Adafruit kit doesn’t have the same LEDs or switch, but those are relatively trivial changes to make.

Little Printer is going to be a lovely, polished piece of hardware, with some very polished and intuitive software that works with it. I want one. However, it’s not clear to what extent you will be able to use that hardware outside of the experiences that BERG and their partners have built2.

I think the best way to characterise it is as follows: if you just want a simple printer in your living room, with as little fuss as possible, you probably want the consumer experience that Little Printer will hopefully deliver. If you’re interested in tinkering and exploring what (potentially esoteric) things might be interesting to print, then you might be interested in using what we’ve built.

There’s no reason why you can’t use both. I probably will. I don’t see our project as being competitive with Little Printer. Instead, I think it’s a nice open-source complement which some people might find interesting, and they can use our system to get started exploring small printers now. 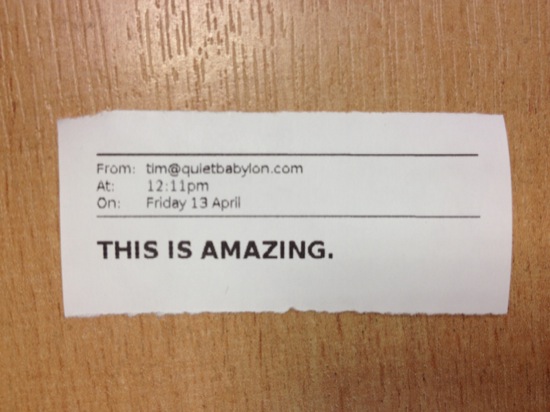 A: Gosh. Thanks Tim! And thanks also for including us in your Wired Design article, which also gives a good overview of some other really interesting printer projects. 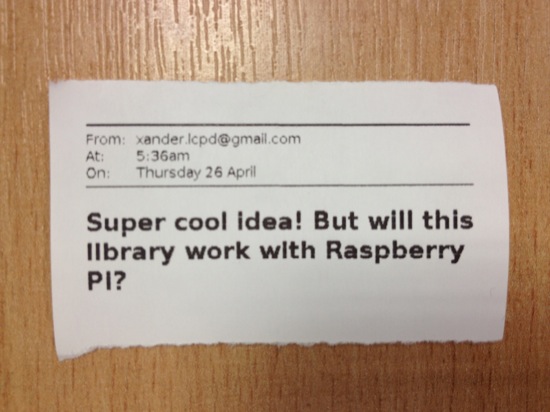 A: Well, Xander, there’s no reason why the Raspberry PI couldn’t be set up to work with Printer. It would, I imagine, fill the same role as the Arduino, whose only job is to poll a URL for data, and then send any received data over a serial port.

I would expect it to be much easier to write the software to run on the Raspberry PI, because you’ll be able to program it in a high-level language like Ruby or Python. 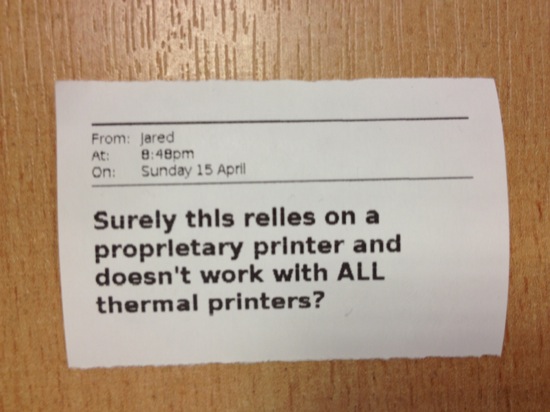 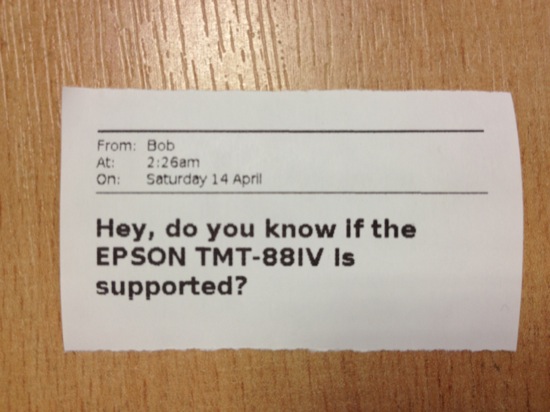 A: The printer-specific parts of the system are isolated inside PrintProcessor classes. These take abstract image data which the system produces (essentially an array of pixels), and should emit data suitable for a printer.

When the Arduino (or Raspberry PI, or anything else) polls the server for data, it does so with an Accept header that is used to tell the server what kind of printer is being targetted. The default is A2-raw, corresponding to the A2Raw print processor, which translates the pixels into the raw serial bytes that the printer will understand.

If you want to use a different kind of printer, you’ll need to do two things:

I’m hoping to get a chance to make the documentation around this more comprehensive, but there are already quite a few things to investigate. If you’re interesting in tackling this yourself, get in touch on the mailing list and we’ll do our best to help you out. 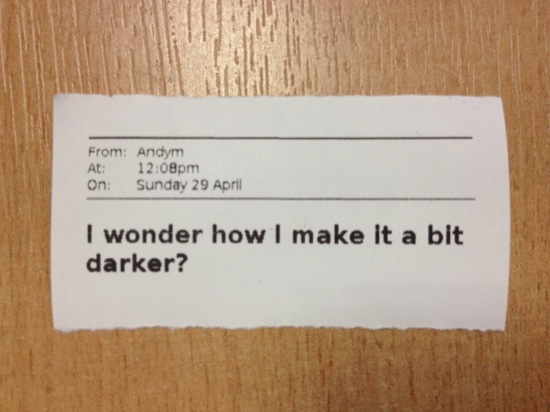 A: I’d like to add some configuration via the server to control the darkness of printing, but for the moment you can control this by modifying the type in the Arduino sketch to something like A2-raw.240.

You can tweak this value to suit your printer. What I’ve found is that the darker you make it the more likely it is that the paper will stick to the print head. 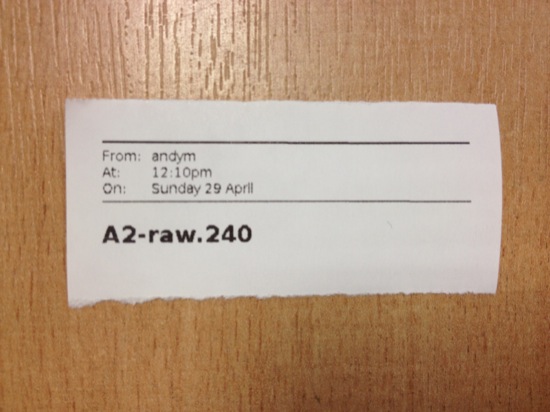 A: If you’re using the default printer type, you can flip it by editing the Arduino sketch and setting the type to A2-raw.240.flipped. Again, I’d like make this a bit more elegant, but for the moment this works. 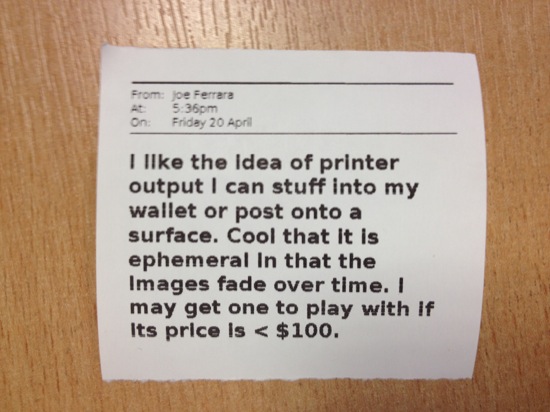 A: I’ve spent some time investigating costs for doing this, and you can see a fairly detailed breakdown in the component list on the wiki. As that page concludes, there’s a fairly hard lower bound to the component cost, even buying in bulk, and it looks like the raw cost is around $140 or £80. That’s without any margin at all, and doesn’t include postage or any local taxes (like VAT here in the UK).

I’d love to be able to sell everybody a printer for as little as possible, but realistically that would mean building our own controller boards, rather than using Arduinos. This would be very expensive for us to develop (as I’m sure BERG will have experienced), and also makes the final hardware less hackable for you.